Level Up Your Health

To combat her hyper-mobility issues, Jill has been given some exercises from our friends at Timberlane Physical Therapy.  It was the therapeutic recommendation of Leslie Bell, DPT, that Jill become “strong like bull.” This morning, after impressing the therapists there with the extent to which she had actually been practicing her strength exercises, Jill took on a new set of movements that will help carry her towards beastly strength.  Here are some pictures:

1. This first one is a progression of her initial set of scaption exercises.  In addition to working her rhomboids and low-traps with the cable, standing on the dyna-discs here adds a proprioceptive challenge here, and engages stabilizers in the legs and core.  If one does not have a cable set up at home (we do not), consider using a theraband with a knot tied in the middle that you secure by closing the knot in a door, or something similar. 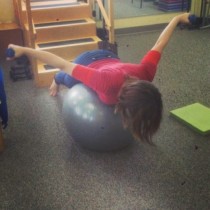 and stability combo exercises.  These dumbbells were 2lbs, which was a progression from the initial weight of 1lb.  If you don’t already have a stability ball at home…um…get one.  That’s my take on that.  Jill adds:  you can also use canned goods in lieu of weights for theses movements.  Grab some beans, y’all.  And eat them afterwards for the protein.

3. You know how it goes, guys: you’re having a good time, designing a corrective exercise program,

and then bam!  Someone busts out a kettle bell.  Jill was working on some figure eights, around the worlds, and even a couple of 1/2 turkish get-ups (she would start in the standing position with the arm extended above her head, and then touch her opposite hand to the floor while maintaining the relative position of the kettle bell.  In other news, she is better at this movement than I am.

We also got into some medicine ball partner drills, but I think I’ll wait until we have some video of practicing those to go into detail.  In the mean time, let’s keep doing our homework, and get strong like bull!